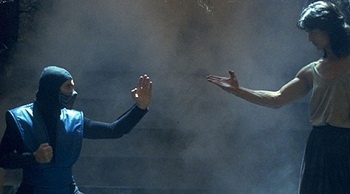 The Mortal Kombat franchise may see a new movie if it can clear some legal hurdles.

A new Mortal Kombat movie is on the way, assuming it can get past a few licensing issues. Warner Bros has been looking to reboot the franchise with a third movie, but have hit a bit of a snag in the form of Threshold Entertainment, who filed an injunction claiming that Warner Bros shut them out of the new movie’s production.

Threshold still holds license rights to the Mortal Kombat movie franchise. The injunction cites an agreement Threshold made with Mortal Kombat creator Midway in 2006 to develop a third movie, but when Midway declared bankruptcy in 2009, Warner gained most of its holdings. The result is that each company has a legitimate stake in a Mortal Kombat movie: Threshold from the movie side and Warner Bros. from the game side.

Does this legal tiff spell the end of any possible Mortal Kombat reboot? Not necessarily. The lawsuit’s primary claim is Warner Bros has shut Threshold out of development. Potentially, if Threshold is given a proper role in the development the movie can move forward. Until then, there are still the old Mortal Kombat movies lying around. With the quality of the original source material, they’re sure to be just as good as they were fifteen years ago, right?