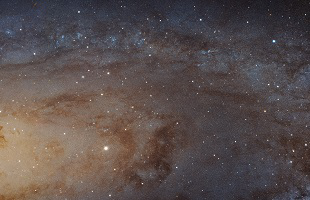 NASA and the ESA (those rad chaps across the pond that recently dropped the Rosetta probe and Philae lander on a comet) have released a fresh image taken by the Hubble Space Telescope.

We now have the largest, and sharpest ever image of galaxy M31, more commonly known as Andromeda. The image has over 1.54 billion pixels, with an original resolution of 69536×22230. To put the size of the image in perspective? That’s more total pixels than 186 of the latest and greatest 4K televisions (which typically rock a 3840×2160 screen resolution). The mosaic image is 411 individual images stitched together.

“Images were obtained from viewing the galaxy in near-ultraviolet, visible, and near-infrared wavelengths, using the Advanced Camera for Surveys aboard Hubble,” says the Space Telescope release. “This view shows the galaxy in its natural visible-light color as photographed in red and blue filters.”

Andromeda is our (the Milky Way’s) closest spiral galaxy neighbor, at only 2.5 million light years away. (Our closest galactic neighbor is the Canis Major Dwarf Galaxy, which, oddly enough, exists inside the Milky Way.) Because of Andromeda’s proximity, it’s a favorite photographic target for our little blue marble, and this latest image shows exactly why that’s the case.

How many stars are visible within the image? Over 100 million, and the image shows a small chunk of space that stretches over 40,000 light years.

While we have a reduced size image down below, the original image can be seen here, complete with a zoom tool. You can also download the original image — although the 4.3 GB file size might keep you from that. The BitTorrent magnet link for the image is here.