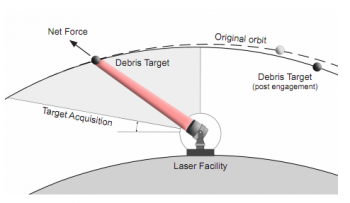 If the proposal to help de-orbit space debris goes through, the sky will actually start falling.

The problem with our culture living firmly in the Space Age is our dependence on satellites for everything from communication and content consumption to global positioning. All that awesome functionality is derived from hundreds of man-made satellites in orbit 500 miles above the surface of the planet. Back in 1978, Donald Kessler predicted that, if we’re not careful, there would be so many objects in space that collisions might surround the Earth with a belt of junk. The Kessler syndrome is now fast becoming a reality as a collision in 2009 of the Iridium 33 and Cosmos 2251 satellites caused a series of smaller crashes that littered up space. This junk not only threatens consumers but also further exploration and even the International Space Station. All previously proposed solutions to clean up this mess and prevent further accidents are prohibitively expensive – a massive space Roomba perhaps? – but a new study by NASA has an elegant solution: blow it up with lasers.

Or more accurately, shoot a laser from Earth at pieces of junk in space to slow it down enough for it to harmlessly fall out of orbit. The idea of pew pew lasers into space is not entirely new; the Chinese successfully tested a weapon to remove enemy nations’ satellites in 2007. But that’s the problem, having an expensive laser shoot a powerful enough blast to blow up satellites would not make our allies (or enemies) very comfortable.

The new study conducted by James Mason at NASA Ames Research Center in California devised a plan to use a comparatively weak 5 kilowatt laser aimed at junk for a few hours a day. The photons from the laser would slow down the orbit of the trash in space, and further ministrations would eventually degrade the orbit until it fell. The proposed system could help rid the skies of debris by focusing on up to 10 objects each day, and could even be used to help position satellites so they don’t have to drag up tanks full of fuel to adjust their trajectories with thrusters.

It sounds like a pretty good idea, especially since Mason and his team estimate that the total cost of the system could be kept under a million dollars. If we could get rid of a potentially disastrous problem by only investing such a small amount of funds, then the fact that we’re using lasers to clean up trash is just an awesome side bonus.