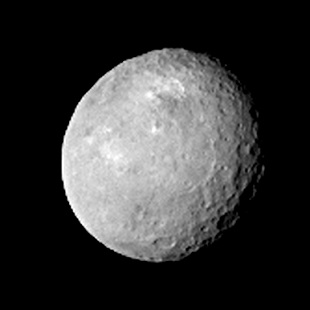 Image were taken earlier this month from 52,000 miles away.

NASA’s Dawn spacecraft set out in 2007 with one goal in mind: To aid NASA in the research of dwarf planets inside the asteroid belt. It’s due to start orbiting Ceres, its secondary target, early next month, but it’s already close enough to snap some sharp images of the planetoid.

According to NASA, the new images were taken last week while Dawn was approximately 52,000 miles away from the planet.

“Dawn will be gently captured into orbit around Ceres on March 6,” said NASA in its latest Dawn update. “As the spacecraft delivers better images and other data, the science team will be investigating the nature and composition of the dwarf planet, including the nature of the craters and bright spots that are coming into focus.”

NASA says the images “have a resolution of 4.9 miles per pixel,” and they’re the best, sharpest images of Ceres currently available.

Before aiding NASA and UCLA (the school tasked with the lion’s share of Dawn’s mission science) in Ceres exploration, Dawn spent over a year orbiting Vesta, an asteroid over 300 miles in diameter. By studying the two bodies, NASA hopes to gain a better understanding of how our Solar System originally formed.

Ceres was discovered in 1801, but its existence (or rather, the existence of a planet between Jupiter and Mars) was hypothesized as far back as 1772.