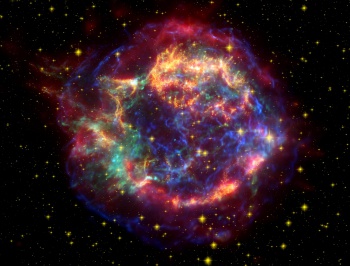 Astrophysicists have created the first-ever map of radioactive material in a supernova remnant, revealing how shock waves rip apart dying stars during supernovas.

An international team of astrophysicists have made use of a high-energy X-ray observatory to perform an autopsy on a dead star – specifically, the supernova remnant Cassiopeia A. The results indicate that a star’s death is far more chaotically violent than initially believed.

The Cassiopeia A remnant was created more than 11,000 years ago, when a massive star blew up as a supernova. The stellar corpse was analyzed using NASA’s Nuclear Spectroscopic Telescope Array (NuSTAR), allowing for the creation of the first-ever map of radioactive material in a supernova remnant.

“Stars are spherical balls of gas, and so you might think that when they end their lives and explode, that explosion would look like a uniform ball expanding out with great power,” said Fiona Harrison, the principal investigator of NuSTAR at the California Institute of Technology and one of the lead authors of a new paper. “Our new results show how the explosion’s heart, or engine, is distorted, possibly because the inner regions literally slosh around before detonating.”

When researchers have tried to create simulations of supernovas, the main shock wave would stall out, and the star would fail to shatter. But these latest findings strongly suggest that the exploding star sloshes around, reenergizing the stalled shock wave and allowing the explosion to progress.

47% of Australian Gamers Are Female