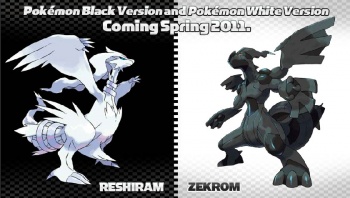 Nintendo and The Pokémon Company have announced the release window for Pokémon Black & White outside of Japan.

Those with a hankering for the capture of sweet, innocent creatures for the purpose of forcing them to battle to the death will get their next crack at a selection of new Pokémon in about a year. It’s been announced that Pokémon Black & White will be released in North America and Europe in spring 2011.

Pokémon Black & White were first revealed earlier this year and details on the games have slowly trickled out, including what the starting Pokémon will be. They’ll also bring a 3D graphical style that the series hasn’t seen before.

With 207 million units of Pokémon sold in the past 14 years, and the recent remakes Pokémon HeartGold & SoulSilver moving 8.4 million by themselves, the dead carcasses of a pig and and giraffe could be on the covers of Pokémon Black & White for all the Pokémasses care. Look for more details on the titles as we near their fall 2010 Japanese release date.