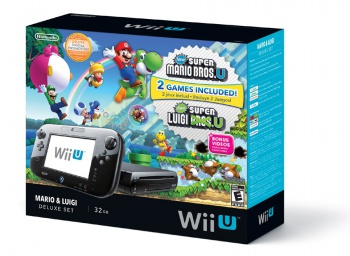 The new Wii U deluxe bundle will replace the current bundle, which includes Nintendo Land.

It’s still the year of Luigi for another two months, and just in time for the holiday season, Nintendo has announced a new Wii U deluxe bundle that bundles New Super Mario Bros. U with its New Super Luigi U DLC. The bundle will replace the current Wii U deluxe set in the US, which currently comes with a copy of Nintendo Land. It’ll set you back $300, and be available on November 1.

Both games will be included on a single disc, and Nintendo Land will become available at retail and on the Nintendo eShop for $30. Just like the Nintendo Land bundle, the Mario and Luigi bundle will come with 32GB of internal memory, a charging cradle and stands for console and controller, and a Nintendo Network premium subscription.

Nintendo added that the limited-edition Wii U deluxe bundle that contains a download code for The Legend of Zelda: Wind Waker HD will only be available while supplies last, and will also set you back $300, down $50 from what we previously believed.

Nintendo is finally putting together a strong lineup of games for its struggling system, with Wind Waker HD and Pikmin 3 already out, and Super Mario 3D World and Mario Kart 7 right around the corner. It makes sense that they’d remove what is arguably one of the console’s weaker gamers (Nintendo Land) from the bundle, and replace it with one of its best launch titles.

Will this bundle finally convince you to get a Wii U, or are you, like me, just holding out for the new Smash Bros.?