Series producer Eiji Aonuma has confirmed that the 3DS remake of The Legend of Zelda: Majora’s Mask 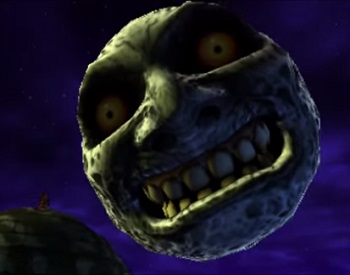 Back when Nintendo ported The Legend of Zelda: Ocarina of Time to the 3DS, it made a number of additions and tweaks aimed at improving the overall gameplay experience to be more enjoyable to newcomers and Zelda veterans alike. One of the big questions to emerge from the wake of its reveal that it will be releasing a similar port of Majora’s Mask is what players can expect to see altered this time.

Speaking in a recent interview with Famitsu, series producer Eiji Aonuma may have given us our first inklings of an answer. He confirmed that “there were many things” from the game’s original development process that he “would have liked to change.” Hoping to narrow these items down he apparently spent some time replaying the original version. One of the changes that emerged from his impressions of that playthrough, in turn, is that one or more of the game’s boss fights could stand to improve a bit.

“A boss fight(s) has been changed,” said a translation of Aonuma’s interview. “It will be content that will make you say ‘how do I beat this guy again?’ if you try playing the original version for the first time in a while after the remake.” Understandably, he wasn’t able to offer many more specific details. That said, he did also confirm that none of the changes being made to Majora’s Mask were being geared toward making it less difficult. “We didn’t make the game easier.”

Another change he cited was the addition of two fishing ponds, something that had been absent from the N64 game. Beyond that players can expect a suite of upgrades similar to those in the Ocarina of Time 3D. That being the case, it will still be interesting to see how longtime fans of the game respond the possibility of a boss fight that’s different from what they experienced in the original. Just speaking personally as someone who loved Majora’s Mask myself, I have to say that I think I’d almost prefer fewer changes and more of a straightforward port. We’ll just have to wait and see, however, how it all pans out.

Star Wars: Tie Fighter – The Dark Side Has Cookies