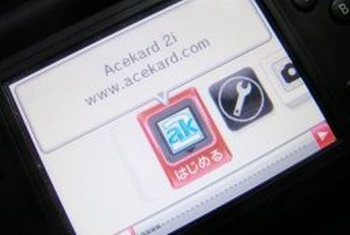 Tweaks to the new DSi may have temporarily put the kibosh on homebrew applications, but hackers have developed a new flash device to work around the problem.

In a move to thwart pirating, tech adjustments implemented in Nintendo’s updated DSi handheld initially resisted attempts to run homebrew software using a variety of flash cart devices. Though extensive consumer testing of eleven of the major flash carts revealed the DSi successfully blocked them all out, the new Acekard 2i manages to break on through to the other side.

When it comes to stopping a thriving gaming hardware hacking community, resistance is futile. The Acekard 2i does indeed work on the Japanese DSi, but it’s hard to say whether or not Nintendo will bother tweaking the handheld’s guts a little further to block out the flash device for the DSi’s North American release next year.

Flash carts are widely used to play pirated software; but they also greatly expand a handheld’s usability, by providing independent developers a platform for their homebrew applications. Nintendo and other major game companies don’t like software piracy, and they go to great lengths to stamp it out. The problem is the homebrew development community takes a hit each time new anti-piracy measures are put into play. Flash carts are sort of a gray area, since the line between using them for illegal game piracy and using them for legitimate homebrew applications is so thin.

What do you think? Are flash carts encouraging piracy or are they making the world a better place via homebrew applications? Discuss below.