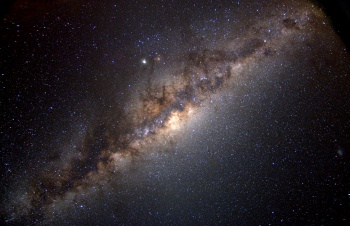 The European Southern Observatory wants you to tell it where to point its giant telescope.

Choosing how to celebrate your fifthieth birthday can be a task, but the European Southern Observatory (ESO) appears to have it down to a fine art. To ring in its fiftieth year of scientific stargazing, the observatory has decided to allow the public to choose which celestial body its Very Large Telescope (VLT) will investigate on its birthday, the 5th of October 2012.

The VLT is composed of a series of powerful telescopes clustered together in Chile’s Atacama Desert, including the world’s most powerful extrasolar planet-hunting machine, the High Accuracy Radial velocity Planet Searcher (HARPS). Operated and maintained by a multinational crew of astronomers and scientists, the array spends its time probing the deepest reaches of our universe for the usual space oddities and stunning views these kinds of places tend to aim for.

The range of celestial bodies up for voting covers spiral galaxies, star clusters, bits of the Magellanic Cloud, and all sorts of other exciting regions of space. At time of writing a Wolf-Rayet star with an emission nebula named Thor’s Helmet is around 200 votes ahead of its closest competition, but that could easily change between now and October 5.

As the ESO points out, astronomers usually have to develop projects for years before they’re allowed to spend time pointing machines like the VLT towards the bits of space they’re interested in. While this isn’t exactly the same deal, the competition does mean you can raise your internet-based voice for your favorite star of the selection without having to get a degree or anything first. An email address is required to cast your vote, but the ESA won’t do anything with it beyond let you know whether or not you’ve won one of the prizes attached to casting a vote. Such nice people, scientists.