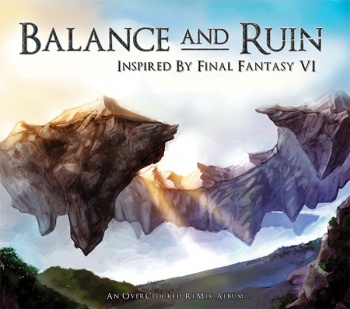 The talented musicians at OC ReMix have launched their 40th album, a massive, epic homage to Final Fantasy VI.

If you’re unfamiliar with OC ReMix, well, shame on you. The site/community has been around for years, and has been the ‘net’s go-to source for gaming-themed music for almost the entirety of its existence. Periodically the people running OC ReMix throw out requests based on a certain theme (in this case, Final Fantasy VI), and the site’s users submit music appropriate for whatever guidelines have been established. The result of these efforts is almost always an album full of great tunes for fans of whichever series or game the record is focused on – in today’s case the result is the massive, 6-hour long Balance And Ruin.

It’s appropriate that the release is so immense. Not only is this the fortieth arrangement released by OC ReMix to date, but as it’s focused on Final Fantasy VI (a game that’s arguably the best 16-bit roleplaying game in existence) the music inspired by that title should ideally be as epic and sweeping as the game itself. I’ll admit that I haven’t been able to get through the entire 5-disc set yet (there’s only so many minutes in the day), but from the hour I’ve listened to so far the OC ReMix contributors appear to have nailed that goal on the head.

But you don’t have to take my word for it. Here’s OC ReMix president David “djpretzel” Lloyd to explain more about Balance And Ruin:

Sometimes DMCA notices DO have happy endings, and fans & corporations CAN reach an understanding; after our first kickstarter for a musical fan tribute to the (amazing!) music of Final Fantasy VI was closed at the request of Square Enix, many might have assumed that was the end of it. Instead, they worked with us to make sure that all our T’s were crossed and I’s dotted, and a second fundraiser was launched and successfully funded, well exceeding its goal. Now, many months later, we are proud to release the end result, our 40th FREE arrangement album, Final Fantasy VI: Balance and Ruin!! MP3s available direct & lossless FLACs available via torrent – please enjoy the amazing music of Nobuo Uematsu, re-imagined by fans, including an arrangement performed by the Slovak National Symphony Orchestra (arranged by Chad Seiter) and a mind-blowing version of the opera scene done by Jake “virt” Kaufman in the style of Queen’s Bohemian Rhapsody!!

If all of this has caught your interest, we’ve got one more piece of awesome information to share: Balance And Ruin, being a non-profit fan project, can be yours totally free. Simply visit this download link, select your file type of choice, hit download, and walk away. Even with modern broadband, it will take a bit to pull down 6 hours of music, but the wait should be worth it, particularly for anyone who loved Final Fantasy VI.