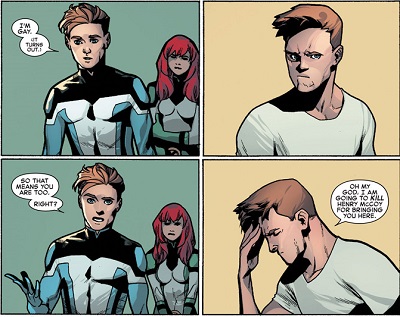 Earlier this year, Marvel Comics and writer Brian Michael Bendis revealed that All-New X-Men‘s version of Bobby “Iceman” Drake was, in fact, gay. Seeing how All-New‘s Iceman is just the younger, time-displaced version of present day Iceman, his outing raised some obvious questions about the older Iceman and his sexual preferences. Perhaps hoping to put the issue to rest, Marvel has released a set of preview pages from the upcoming Uncanny X-Men 600 focusing in on a clarifying conversation between the two mutants.

In the released pages, Young Iceman confronts his older version with Jean Grey backing him up for support. Wasting no time beating around the bush, he tells Older Iceman that he’s gay. “So that means you are too. Right?” Initially, Older Iceman is reluctant to comment. Younger Iceman goes on to tell him however, that while he won’t expect his older self to do anything he doesn’t want to, he’s “going to try” living out of the closet. After a few more wordless panels, Older Iceman says “You’re going to be a mutant and gay. Wow.” He then adds “How are you more put together than me?” Young Iceman, looking almost surprised, then says “So you are gay.”

While we never see Older Iceman actually confirming it with a “yes I am,” it’d be hard to get much closer. As for why Older Iceman might have been lying all of these years, his amazement over Young Iceman’s willingness to be both a mutant and gay would seem to confirm Jean Grey’s earlier theory that Older Iceman, already struggling to live as a mutant, chose to hide his homosexuality, perhaps even from himself. Bendis, following the initial reveal, had promised to delve deeper into the issue going forward. We’ll be interested to see, in turn, just how Bobby Drake, both older and younger, transforms as this new facet of the character(s) deepens.
Source: Comic Book Resources