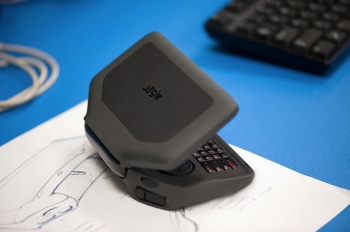 Panasonic has decided to cancel the release of the Jungle MMO gaming handheld.

Panasonic’s handheld gaming device announced last year, the Jungle, has been canceled before it even had a chance to sprout. Panasonic has called in the bulldozers and razed the project to the ground.

The Jungle was meant to be a handheld that would play online games such as Runescape and the Battlestar Galactica MMO, sort of like a mini-laptop with a full keyboard and touchpads. Analysts heavily criticized it, saying it probably wouldn’t appeal to anyone and that Panasonic didn’t necessarily have the tools to compete in handheld gaming.

In a statement, Panasonic said: “Panasonic decided to suspend further development due to changes in the market and in our own strategic direction.” It either took the criticism to heart, or realized that there wouldn’t be enough interest in the device.

Without the support of big names like World of Warcraft, the Jungle probably would have been a failure. If people are playing browser-based MMOs at home, there’s no reason why they wouldn’t just use a laptop. Being able to play out in the wild would require some kind of 3G support, which would cost extra money and turn off consumers. In addition, to actually play MMOs like World of Warcraft the device would have to be packed with a certain amount of power, leading to an increased price. It was a good concept, but perhaps just not financially viable in a world filled with iPads, 3DSs, and NGPs.