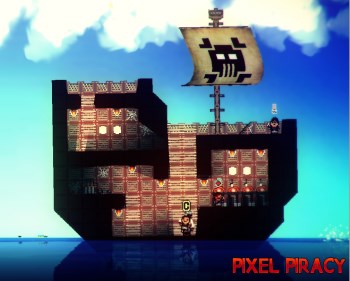 The creators of Pixel Piracy are linking to and seeding a torrent for a pirated version of the game, saying that if people are going to pirate it anyway they might as well do so safely.

Piracy is a fact of life for content producers. No matter what you do, or how well (or poorly) you do it, there will always be people who want to enjoy your work without paying for it. Most game publishers address the issue with some form of DRM but there are a few outliers, like Witcher studio CD Projekt, which has spoken out against DRM for years and recently said that The Witcher 3: Wild Hunt will launch with “absolutely no DRM.”

The creators of Pixel Piracy are being even more aggressive with their anti-DRM stance by providing a link to a pirated version of the game on their website and seeding the torrent themselves. Why? “We aren’t idiots, we aren’t high,” Vitali Kirpu and Alexander Poysky wrote. “We believe that anyone who wants to pirate our game will do so anyways, and feel it’s a much safer bet to offer those people the official link to our game in hopes that they keep their computers virus free.”

They also suggest that people who like the game can support it in ways other than paying for it, by voting for it on Steam Greenlight and sharing the link with other people. “Not everything is about money, and we want to thank those that pirate our title and actually give them the opportunity to do so with our blessing, while giving them an opportunity to actually make good on the piracy itself,” they continued. “Tell your friends about us, share the link around IF and only IF you enjoy the game, and if you DON’T enjoy it at least you didn’t have to pay for it!”

It’s an unusual approach and one that will no doubt earn the devs at least a few purchases as word of their good nature spreads, but I’m not convinced that it’s entirely positive. Pirates are going to pirate and it’s arguable that the goodwill generated by embracing piracy rather than fighting it (or even just ignoring it) will ultimately result in more money than would have otherwise been earned, but the message that a vote on Steam Greenlight is just as good as a purchase isn’t particularly helpful to anyone who relies on money in order to eat, pay the rent and continue making games.

Call of Duty: Online Has Been Overrun by Robot Zombies