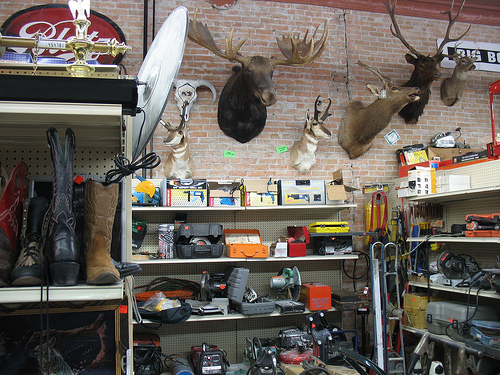 If you’re looking to trade in your old copies of Madden, you may want to stick with EBay.

A new ordinance being reviewed by the City Council of Madison, Wisconsin would require individuals who sell any items to a second-hand store to enter their personal information into a police database.

The idea behind this proposal is that it’ll assist police in catching criminals who make a living selling off their ill-gotten gains (such as stolen books, iPods, games, and movies) to pawn shops and the like, but civil rights advocates are concerned that the new law could end up violating the privacy of second-hand sellers and anyone looking to off-load their old PS2 collection. In using the database, there’s concern that police could potentially build profiles on people based on the music they listen to or games they play.

“The ACLU’s position is quite simply that we don’t need another government database that’s connected to our tastes and our choices for intellectual and entertainment options,” says Stacy Harbaugh of the Madison chapter of the American Civil Liberties Union. She also pointed out that there was nothing in the law preventing Madison police from sharing that personal info with other law enforcement agencies.

Wisconsin state law already requires stores to keep paper records of who sells them what, and there are similar databases elsewhere in the state. But opponents say that the big difference is that info on electronic media is exempt from being entered into those database records. Requiring more personal information may end up harming businesses that depend on secondhand goods.

Capt. Jim Wheeler of the Madison Police Department stated the current system isn’t effective in helping police investigate the tens of thousands of transactions a year that may involve stolen electronics.

“We need to work in a timely manner,” Wheeler said. “Plus, we need to have a deterrent effect. People need to know that if they’re going to take stolen goods someplace, the serial numbers are going into a database and this is going to be matched up with things that are reported stolen.”

Currently the database system has been tested at two local stores. Investigators entered in the names of several individuals with criminal records, and were able to match one of whom had recently sold 47 Wii controllers over the course of a single month.

Free Broken Sword For All