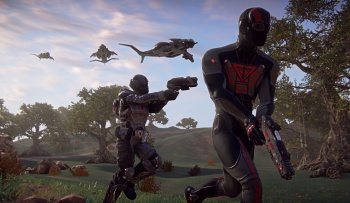 Sony Online Entertainment has confirmed that the PS4 version of Planetside 2 will be present at this year’s E3, and its resolution will be at 1080p, with a “smooth” frame-rate.

Late last year, we reported that the PlayStation 4 version of Planetside 2’s visuals will be comparable to the PC version’s “Ultra” setting. Now, in a Twitch stream for the shooter, Planetside 2 creative director Matt Higby has revealed that the game will be playable on the PS4 at this year’s E3. In addition to that, Higby confirms that the PS4 version will be at 1080p resolution with a “smooth” frame-rate. Given he hasn’t revealed the exact frames-per-second, chances are it won’t be at the desired 60fps, since Higby would have released that bit if info if it was the case.

You can check out Higby’s comment in the Twitch video, where he talks about it around the 7:30 mark.

While Sony Online Entertainment has yet to divulge a release date for the game, with it being present at next month’s big event should hopefully signal that its release is soon.

For more Planetside 2 reading, we posted earlier in the year that the sci-fi shooter will be implementing weekly updates. Also of note, for those hoping to play the PS4 version alongside PC players, that, sadly won’t happen due to “update cadence.”