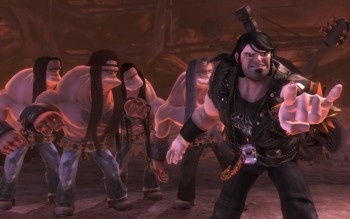 Double Fine founder Tim Schafer thinks that Bobby Kotick’s attitude is harmful to gaming, and hopes that he’ll go do something else soon.

There are a number of words you could use to describe the Activision CEO; Schafer has picked out a couple and neither of them is particularly complimentary.

Kotick is poorly suited to the videogame industry, Schafer said, and that he has little interest securing the goodwill of gamers. “His obligation is to his shareholders,” Schafer said. “Well, he doesn’t have to be as much of a dick about it, does he? I think there is a way he can do it without being a total prick.”

There’s bad blood between Schafer and Activision after the publisher sued Double Fine last year in an effort to stop the launch of Brutal Legend. Activision had dropped the game after its merger with Vivendi, but said that it had invested millions of dollars in the game and still had a legitimate publishing claim to it.

Schafer believes that Kotick treats making games the same way you might treat making bars of soap or ball bearings, and that this is having a negative effect on the industry. He says that Kotick should be trying to build something, but instead is too fixated on profits: “You can’t just latch onto something when it’s popular and then squeeze the life out of it and then move on to the next one,” he said. “You have to at some point create something.”

“Hopefully he’ll go back to another industry scene,” Schafer added. “He could go to an industry that makes more money … something that suits his passions more. Weapons manufacturing?”

Few gamers are going to disagree with Schafer, as Kotick does have a tendency to alienate them with the comments he makes, but to suggest that Kotick hasn’t built anything in the industry seems disingenuous, however, as he has been the Activision CEO for nearly twenty years.