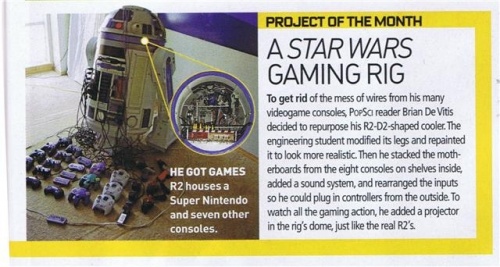 R2-D2 is the best droid ever: He can display messages from captive princesses, hack any terminal, and play games on eight different consoles from the NES to the Xbox.

Xbox 360 faceplates and PS3 Slim repaintings aside, case mods generally seem confined to the realm of the PC. But every so often, there comes along an enterprising young console modder who goes above and beyond the call of duty. This is one of those times.

In the September 2009 issue of Popular Science (Page 75, to be exact), there’s a photo of the beauty pictured here. Created by PopSci reader Brian De Vitis as a way to “get rid of the mess of wires from his many videogame consoles,” this R2-D2 is stuffed full of the motherboards from eight different consoles. Judging by the controllers, we can make out (left to right): Xbox, PS2 (or PS1), Saturn (or Genesis), SNES, NES, N64, GameCube, and Dreamcast – as well as some good ol’ NES light guns.

The second-best part? No TV required: The dome is equipped with a projector, just like the real R2-D2. So yes, you can play Final Fantasy X anywhere, be it in your living room or in the secret Rebel base at Yavin IV.

The TF2 Guard Dog Update: All Bark, No Bite