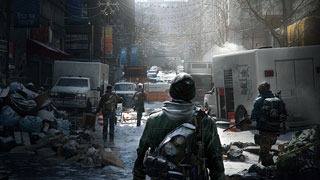 If an Amazon listing is to be believed, we’ll see the next expansion for The Division later this month, at least on Xbox One.

Amazon may have inadvertently leaked the release date of the next expansion for The Division. A screenshot posted to Twitter by YouTuber Arekkz shows the release date as June 28. The listing (which is in German) also lists pre-loading for Xbox One as beginning on June 25. Of course, there’s a timed exclusive in place for the expansion. Xbox One players will get the expansion a full 30 days before PC and PS4 gamers.

The Division has had a troubled history thus far. Although it has been a commercial success, and is the fastest-selling new franchise in Ubisoft’s history, it has faced a number of issues along the way. Backpack glitches, disappearing characters (more than once!), and missing daily missions, just to name a few. Most recently, last week’s patch was delayed, with Ubisoft calling it “Unsuccessful.”

Hopefully, Ubisoft will resolve any lingering issues before they release another add-on to the game. With the problems they’ve faced so far, I’d take this release date with a huge grain of salt, as it might end up falling victim to need to fix bugs before adding more content.