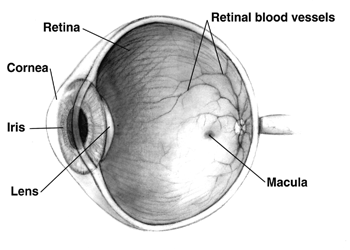 A bionic retinal implant may help the blind see.

Blues legend Stevie Ray Vaughan once sang that love could give sight to the blind. Unfortunately, modern medical science has yet to make any breakthroughs in love-based optics. The good news, however, is that researchers have been having much better luck harnessing the power of light. A retinal implant powered by concentrated visible light has restored limited sight functionality in blind test animals, and if this line of research advances, a relatively simple surgery could help the visually impaired see again.

A team of researchers writing for Nature Photonics devised and tested the device in a number of lab rats. The implant, which attaches to the back of the eye, absorbs near-infrared light via a special pair of glasses, eliminating the need for a conventional battery. While normal, natural light is roughly 1000 times too weak to power the device, it is still less cumbersome than a traditional battery, which usually fits behind the ear and attaches via an intrusive cable.

While the device has yet to see human testing, similar retinal implants have demonstrated encouraging results in patients, including restoring partial sight in patients with degenerative ocular diseases. At present, these implants can only restore non-image forming vision, which is a mechanical function of the eye, rather than image-forming vision, which has more to do with how the brain perceives visual information.

Admittedly, this technology is not at Geordi La Forge levels just yet, but each new medical discovery has humble beginnings. Self-sustaining, minimally intrusive implants could be a fascinating new avenue of treatment for those who have lost their sight – and, perhaps someday, for those who never had it to begin with.