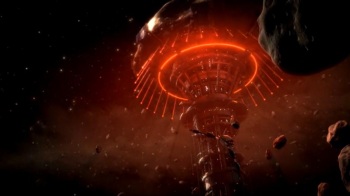 Content found on the Mass Effect 3 game disc may offer some insight into the upcoming Omega DLC.

About a month ago, an intrepid Mass Effect “data miner” dug up details about the conflict between Cerberus and Omega, the asteroid underworld run by Aria T’Loak, buried on the Mass Effect 3 game disc. It looked at the time like simple bits and pieces of content cut out during the production process, but with Aaryn Flynn’s recent reveal of the forthcoming Omega DLC, it’s suddenly taken on much greater significance.

There’s no indication that the information on the game disc is in any way related to the planned DLC, and in fact it seems to conflict with the Cerberus/Omega subplot that was set up in the Mass Effect: Invasion pre-release comic. Still, consider yourself warned: If this information is accurate, there are huge spoilers ahead.

A summary of the set-up indicates that Aria remains in charge of Omega and has entered into a neutrality pact with Cerberus, leaving life on the station largely as it was in Mass Effect 2. But she eventually agrees to provide large quantities of eezo to the war effort against the reapers, leading Cerberus to attack; when that fails, it puts up a blockade in an effort to starve Omega out. Aria asks Shepard to board the Cerberus command ship and lift the blockade, after which things get really interesting.

“A notorious Cerberus tactician orchestrating the Omega blockade crashes on a planet after being attacked by Aria’s raiders. Aria wants to grill the tactician and asks you to retrieve her before Cerberus does. Your shuttle down to the planet is rocked by a missile: Cerberus has had time to establish a defensive perimeter,” according to the report.

“You are forced to make an emergency landing and must fight through patrols, traps and a deadly environment to get to the Cerberus ship,” it continues. “Once there, you are confronted by Zaeed: He’s signed on again with Cerberus as the tactician’s bodyguard, and is determined to fulfill his contract. After a fight you have a chance to either persuade the merc that he’s on the wrong side or finish off Zaeed. Either way, you take the tactician back to Omega.”

It sounds entirely plausible as DLC and if it turns out that this is in fact BioWare’s plan for Omega, the next question is whether this is cut content the studio decided to restore or the next step in a long-term DLC plan BioWare cooked up well before the release of the game. Or to put it another way, should we get mad because this stuff is on the disc, or be happy that lost content is being restored?