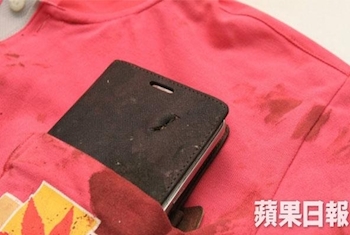 In a strange turn of events, a Taiwanese man is alive today thanks to his phone- a Samsung Galaxy Mega- which happened to protect against an incoming bullet.

Details about the incident have been conflicting across multiple reports, but there are common threads in the story. Han, the owner of the Galaxy, happened to be outside when he found a wallet lying on the ground. Picking it up, he joked that the owner would “treat everyone to beers”. A short time later the original owner of the wallet, named Xu, returned to the spot. Words were exchanged, Han pulled out a knife (some say it was a sickle), and Xu responded by pulling out a pistol. Xu shot Han, and proceeded to flee the scene.

The bullet traveled cleanly through Han’s arm, stopping only when it came into contact with his Galaxy Mega in his shirt pocket. The perfectly placed phone protected against the bullet entering his chest and causing even further injury. Since the attack avoided damaging any bones, Han is expected to make a full recovery. Xu ended up giving himself up to the police, and told police that he had attempted to kill Han.

Interestingly enough, this incident is not the first one in which a cell phone has protected its owner against firearms. Back in May, a Nokia Lumia 520 protected a Brazilian police officer that was shot at by home invaders- and a Florida gas station cashier was saved by his HTC Evo 3D last October when a thief shot him as they left the store.

Report: Studio Ghibli May Be Shutting Down – Update

Man Kills Self While Taking a Selfie With a Gun