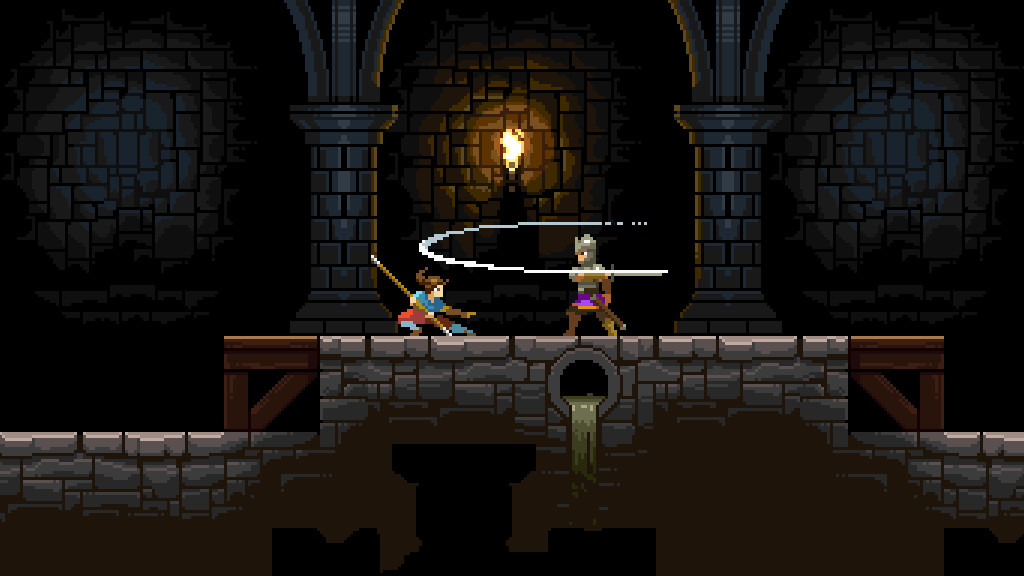 Savior aims to provide old-school graphics with a movement system rooted in modern design. Announced with an action-packed trailer earlier this month, developer Starsoft Entertainment has shown off the game’s fluid combat, dialogue trees, and a mystically advanced open world.

Cliff diving onto purple dragons mid-flight is just the tip of the iceberg of Savior’s trailer. Judging by the opening moments, Savior’s protagonist, Sam, looks to have found herself in quite the desolate situation. The game’s website describes the island setting of Arcadia and a cold war between two factions. In the middle of it all is Savior’s protagonist, Sam, and her struggle to survive on the “enigmatic” island.

For the first portion of the trailer, Arcadia seems rooted in medieval technology, but after a descent down a Metroid-like elevator, the more technologically advanced portions of the world really open up.

Uniquely, one of the methods Starsoft says is vital to survival is learning to make friends to join you on your journey: “As you earn trust, you’ll be offered quests to restore life and land. Through experience, you’ll gain skills, strength, and endurance. Become the champion this broken world needs. Uncover the secrets of your origin and help your people thrive.”

Savior’s combat can be described with one word: swift. Sliding under the legs of a mallet-wielding guard looks smooth enough, so add in Sam’s follow-up jump off the guard’s face onto a high-up ledge and it becomes clear how Savior is looking to elevate combat from the typical sidescroller. Intricate animations back this up, with some highlights including sword swings that cut things a little too close and leaps at faraway ledges.

Starsoft has some notable talent behind it, too, as ex-Nintendo employee Dan Adelman is taking on the business side of things for Savior while Robert Borth, who has worked with Sierra and LucasArts, is handling concept art and additional production art. David Hughes is handling sound design, having previously worked on films by Steven Spielberg, David Fincher, and Robert Zemeckis.

Savior does not have a release window, so keep checking in to find out when the game will launch for PC and Mac.