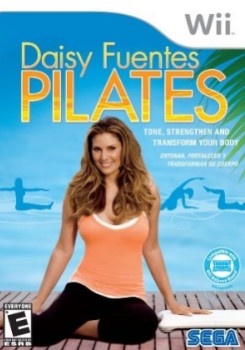 Sega is launching a radical and unprecedented effort to bridge the racial divide that has long plagued the videogame industry by advertising the hotly-anticipated Wii game Daisy Fuentes Pilates in both English and Spanish.

Although nobody realized it, it turns out that the videogame industry is a roiling hotbed of racial discrimination. Not only do videogame characters lack appropriate diversity – and I have to admit that I’ve always felt the Bosmer were a little under-represented – but Valve, one of the industry’s foremost developers, recently raised an uproar by suggesting that African-Americans do not actually carry the special gene which renders them immune to zombification at the hands of the rampaging undead.

Fortunately, Sega has stepped up to show us the way to a more ethnically-accommodating future with the launch of a brand-new advertising campaign for Daisy Fuentes Pilates, the most anticipated pilates game featuring Daisy Fuentes to ever hit the market, that will employ not just one but two languages.

“While we’ve done little bits and pieces [of Hispanic-targeted marketing] over the years, this is our strongest effort to date,” said Rick Naylor, senior director of marketing at Sega. “The packaging is completely bilingual in English and Spanish, and the advertising has all been in [both].”

That’s right, both. The publicity campaign will include ads in Hispanic magazines like Latina, People en Español and the Spanish-language version of Cosmopolitan, on various Hispanic websites and “a public relations and event market effort that targets Hispanic media.”

While other countries have dabbled with this so-called “bilingualism” in the past, Sega’s groundbreaking effort to balance the scales of discrimination is especially remarkable because it involves Daisy Fuentes, a woman who is both extremely attractive and, apparently, Hispanic. Her experience as both a minor television personality and someone who was born in Cuba makes her an obvious choice to represent this exciting new pilates game for the Wii.

“We would like to see how well it resonates and how effective our reach is to the Hispanic market,” Naylor continued. “There are certain types of [games] that lend themselves better to the market. This will be a good bellwether for what we plan to do there… If this type of product and marketing is successful, it’s something you’ll see more from us in the future.”

Thank you, Sega. Your bold vision of equality for all is an inspiration. Daisy Fuentes Pilates comes out tomorrow.

A View from the Road: How I Learned to Stop Worrying and Love the Microtransaction

Fat Princess Has a Laggy Start, Getting Quick Fix