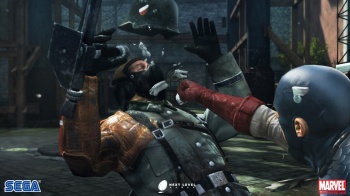 Sega has announced a new upcoming title featuring one of the greatest American superheroes.

Sega’s last foray into the comic book superhero world didn’t go too well, with Iron Man and Iron Man 2‘s poor reception possibly leading to the shutdown of the studio responsible. However, Sega still has more comic franchises to take on, and recently announced that its Captain America game is in completely different hands.

The game’s official title is now Captain America: Super Soldier and hopefully is sitting safer at Next Level Games, known for the recent Punch-Out!! remake, Spider-Man: Friend or Foe, and Nintendo’s Mario Strikers titles for the Wii and Gamecube. It also has an original story written by comic book veteran Christos Gage.

Super Soldier will follow Captain America during World War II as he goes up against arch-nemesis the Red Skull. In the quest to throw his shield directly at Red Skull’s skull, Cap will have to make his way through a “massive castle” filled with the forces of Hydra, and go up against other madmen like the evil scientist Arnim Zola.

The game is a third-person action adventure and Sega says it has “free-flowing combat and acrobatic platforming.” Players will combine melee with diverse shield attacks, which can take out multiple enemies at once and deflect enemy bullets right back to their source. The shield will also be used to solve puzzles and scale walls.

Is there any chance of this inheriting some of Arkham Asylum‘s mojo, even just a little bit? I seriously can’t get enough of one of the first screenshots, showing Captain America really cleaning a soldier’s clock. Unfortunately, Super Soldier is being developed as a partial movie tie-in to the Captain America flick coming next year (it takes place in the same world), which could mean that it’ll be released even if it’s not ready. I won’t get down on it before the game comes out, though.