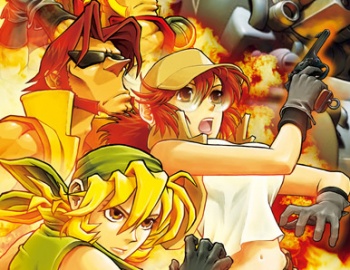 Seemingly abandoning any semblance of a proper numbering scheme, SNK has revealed the next entry in its flagship run-and-gun series, Metal Slug XX.

If the last Metal Slug you played was number 7, don’t let the “XX” in the game’s title fool you into thinking you’ve missed 13 entries. This new Metal Slug is something of a remix of that DS-exclusive shooter.

The PSP-exclusive is said to contain seven levels complete with alternate paths, over 70 mini-games in the returning “Combat School” mode and multiplayer via the handheld’s ad-hoc networking. All pretty standard, really.

On the other hand, this new game promises “additional characters” to complement the standard Ikari Warriors and Metal Slugians. Given SNK’s penchant for fan service, this probably indicates at least even odds of a cameo appearance by someone we’ve seen before, somewhere in the SNK universe. I’ve got my fingers crossed for Lee Rekka, but they’ll probably just shoehorn a certain scantily clad kunoichi into the game specifically to spite me with breasts (the worst kind of spite).

Currently the only release information SNK has revealed is that MSXX will hit Japanese retail shelves on December 23. Based on series history though, I feel confident that we can expect to see the game make its worldwide debut a short time later.