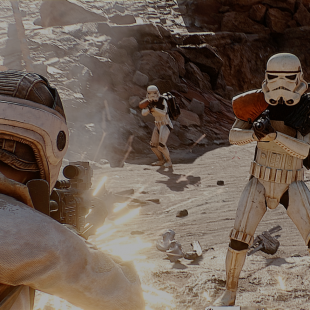 Sony has announced a new version of Star Wars: Battlefront for the PS4’s upcoming VR headset.

Yesterday, Sony revealed new release information about its PlayStation VR headset. Coming out this October, it will cost 399 dollars. Sony also confirmed that it expects “to have more than 50 games available” for it before the end of 2016. At least one of these games will take place in a galaxy far, far away.

Speaking at GDC session yesterday, Sony representatives have announced that a VR compatible Star Wars: Battlefront will be coming to PS4. A number of details are still unclear. The company, for instance, didn’t share whether or not the VR edition would have identical content to the standard PS4 version. Sony also didn’t deign to share when the VR version would be released. That said, it has been confirmed that VR Battlefront will be a PlayStation exclusive.

While a lot of gamers have had very legitimate gripes with what EA and DICE have done with Battlefront, I think we can still classify this one as a win for Sony. As we’ve seen from other recent examples, Star Wars is something that can get even those lukewarm about VR excited for it. The idea that a game as gorgeous (and honestly fun) as Battlefront could be made even more immersive with PlayStation VR could be a genuine selling point for a lot of gamers.