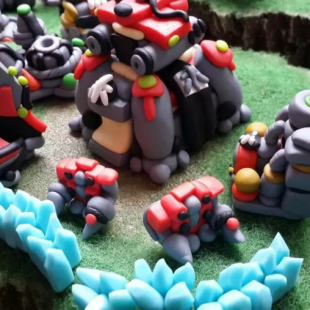 A group of StarCraft 2 fans recently released pictures of their now completed soft clay recreation of Wings of Liberty.

StarCraft, put simply, is a game about Terrans, Zerg and Protoss blowing each other to pieces in a brutal war where the casualties are massive and the destruction is epic. It’s also a franchise that’s inspired some of the most rabid fans and intense competitions in gaming history. The point here, is that StarCraft, on multiple levels, is serious business. How better to celebrate it then, besides creating a diorama filled to the brim adorable, super-deformed versions of the franchise’s most deadly creatures?

That, at least, is how one gamer decided to pay tribute to the famous game series. Posting under the moniker “Iphone 4 Dish,” a StarCraft fan recently released a series of photos showcasing a soft clay diorama based on units from StarCraft 2: Wings of Liberty. According to reports, the diorama took two years to complete and was built by Iphone 4 Dish along with a cabal of friends.

We don’t have any specific measurements for how large the diorama is. That said, if the posted pictures are any indicator, it’s fairly huge in size. Even if it weren’t ginormous though, it’d be hard not to be impressed with the obvious work put into coupling the SD style with a level of intricacy appropriate to the game’s units. I personally love, for instance, how the Terran aerial units look. I would pay top dollar to get my hands on one of the itty-bitty battlecruisers. Granted, I could just pick up some clay and try making one myself, but that would require talent, patience and dexterity that my poor digits don’t possess. Check out the images from the diorama and let us know what you think.