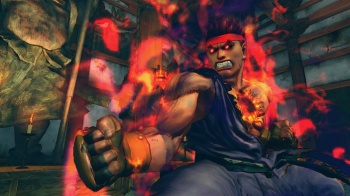 PC pugilism enthusiasts will have a chance to throw down with Capcom’s latest fighter this July, courtesy Valve’s downloadable gaming service.

While the original Street Fighter IV was released for the PC, Capcom cited concerns over rampant piracy on the platform as justification for Super Street Fighter IV appearing only on consoles. There’s no word on why the publisher has had a change of heart for SSF4:AE.

Though the game won’t go live until July, players can pre-purchase the title via the Steam store for $40. Social butterflies can also distribute the game amongst friends with the $120 four-pack.