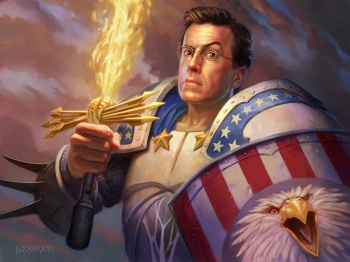 Update: New York Times television writer Bill Carter has finally tweeted the answer to the question we were all asking. “Colbert confirms– he will NOT do the CBS show in his Colbert Report character.” That’s understandable, but really too bad.

Original Story: Stephen Colbert will take over as host of The Late Show, replacing the retiring David Letterman, CBS has announced.

According to the announcement from CBS President Leslie Moonves, Colbert gets a five-year agreement. No details were released on Colbert’s salary or when his first show will air, but Letterman plans to retire next year.

“Simply being a guest on David Letterman’s show has been a highlight of my career,” Colbert said in a statement. “I never dreamed that I would follow in his footsteps, though everyone in late night follows Dave’s lead. I’m thrilled and grateful that CBS chose me. Now, if you’ll excuse me, I have to go grind a gap in my front teeth.”

“Stephen Colbert is one of the most inventive and respected forces on television,” Moonves said in a statement. “David Letterman’s legacy and accomplishments are an incredible source of pride for all of us here, and today’s announcement speaks to our commitment of upholding what he established for CBS in late night.”

Producers and a location for Colbert’s new Late Show have yet to be announced.

Stephen Colbert to be next host of "The Late Show"…press release coming— CBS Tweet (@CBSTweet) April 10, 2014

Is PAX Worth the Price?