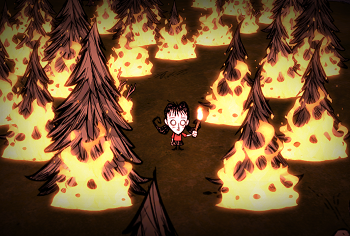 ” title=”” target=”_blank”>Don’t Starve. The first time, the players were told that the game’s map would be randomly generated. During their second playthrough, however, the gamers were told the map was created on-the-fly by an “adaptive” artifical intelligence, which could change things based on the player’s skill level.

After each round, the test subjects filled out a survey about their experience.

“The adaptive AI put me in a safer environment and seemed to present me with resources as needed,” said one player. “It reduces the time of exploring the map, which makes the game more enjoyable,” said another, and these responses really sum up the general attitude of all participants.

Of course, the effect was entirely in their heads. They played the same game both times, no adaptive computer “director” at all. When faced with a challenge in the second play through, they thought to themselves, “well, that clever AI is good at presenting me with scenarios attuned to my skill level!”

A later experiment with a larger group of volunteers and control group repeated the results.

This is certainly something I’m torn on – I would love to have developers take the placebo effect in mind when designing computer players or NPCs; and yet, I’d hate to be one of the suckers.

What games do you guys think could use the placebo effect to best results? My money is on Spy Party – imagine the paranoia that could be induced if there was never any spy.

Twilight Princess May be Getting a HD Wii U Remake