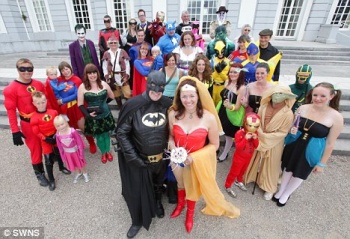 Weddings can be stuffy, but when the guests are all dressed as comic book heroes and villains it takes the edge off.

Sharon and Neil Vaughan love cosplay so much they decided to expose their secret identities and get married as Wonder Woman and Batman instead of as regular Joes. The UK couple wanted all of their guests to get in on the action too, which made for one giant superhero wedding.

“I have always wanted to be Batman, ever since I was a little boy, and Sharon said she had always wanted to be Wonder Woman,” Neil told the Daily Mail. The Vaughans spent a total of around $450 on their outfits, which is less than the typical wedding dress alone can sometimes cost. The savings were reflected throughout the wedding’s expenditures, with Sharon revealing: “Our wedding was absolutely amazing and it cost us less than some couples would spend on just the dress.”

The VIPs of the wedding complimented the groom, with Robin as best man and the Joker as master of ceremonies. Sharon made her entrance to the Wonder Woman television series theme. Guests dressed up as everyone from Watchmen’s Rorschach to Wolverine to the star of Kick-Ass. The pink Power Ranger was also spotted, as was a mini-Iron Man. Though he’s not a superhero, the wedding still allowed Yoda to attend.

Sharon called her wedding a “great day” and Neil says the couple just “wanted to have a fun day with our friends.” I think this sounds much better than any traditional wedding, though I wonder if some of the guests took the opportunity to cosplay too far. Let’s hope the ceremony wasn’t interrupted by too many cries of: “Hulk… SMASH!!”