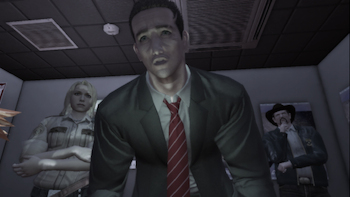 You say you want more Deadly Premonition? It sounds like SWERY would be happy to oblige.

It may not be his top priority, but Deadly Premonition director SWERY has Deadly Premonition 2 on his mind. In a recent interview with GamingBolt, SWERY65 – Hidetaka Suehiro, if you prefer – mentioned he had been working on a follow-up to Deadly Premonition before production on his current project, the Xbox One exclusive D4, kicked into high gear:

“After producing Deadly Premonition, I started work on production of the Lord of Arcana series right away, and during that time I was already working on the planning and pre-production of D4. So you could say that I’ve been working on D4 for about the past 2~3 years or so. Looking back at the original plans, there are some parts which have changed greatly a lot, and some parts which haven’t changed a bit. At the same time I was also working on the sequel to Deadly Premonition and the framework for the Director’s Cut.

SWERY later reiterates that D4 (Dark Dreams Don’t Die) is not a sequel to Deadly Premonition, so whatever he’s done so far is part of a separate project. That also means DP2 will remain on the back burner until after he’s finished working on it.

While SWERY has vaguely suggested he would be interested in making DP2 before, this is an unequivocal confirmation that he has been working on it. That said, it sounds like he spent a very short period of time working on it before moving onto other projects: The game is definitely still in pre-production, and may not be attached to a publisher. Put it another way: SWERY may plan on making Deadly Premonition 2 sooner or later, but that doesn’t mean the game is on the way.