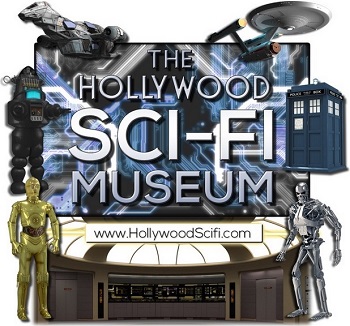 You can find Serenity at the Hollywood Science Fiction Museum. And the Enterprise, TARDIS, Millennium Falcon…

New Starship set out to restore a display set of the bridge of the Enterprise from Star Trek: The Next Generation. After the attention they received and new people joining the project, it has grown into something much bigger. Now, the plan is to open a new museum dedicated to science fiction and real life science.

The Hollywood Science Fiction Museum is massive in scope, but as an early start and a way to build interest, the team started a Kickstarter campaign to build a temporary exhibit. The campaign has already surpassed its $82,000 goal and hopefully the exhibit will be up in 2015. Over the next few years the group would fund and build the permanent facility, which would open in 2018.

This initial funding on starts the team on their journey, allowing them to perform in-depth analyses of other museums, handle legal fees, plan more fundraising, and prepare more concepts for the final product. After this, the next objective is to finish building and restoring the Star Trek bridge sets. This is only the beginning of funding campaigns and work to create this museum, but the potential of the finished product is too exciting to ignore. 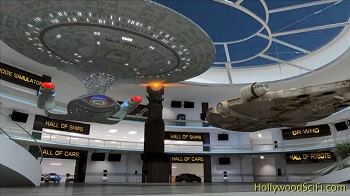 What is in the proposed finished product? The lobby features huge, suspended models of the Enterprise from Star Trek: The Next Generation and Star Wars’ Millennium Falcon. The various exhibit halls include a variety of ships, cars, and robots from science fiction. Serenity (Firefly), the TARDIS (Doctor Who), Vipers (Battlestar Galactica), AT-ATs (Star Wars), Back To The Future’s DeLorean, various Batmobiles, Iron Man, the T-800 (Terminator), R2-D2, C3PO, and so very many more. The museum would include a theater, lasertag, and even be 100% solar powered.

One concept the Kickstarter page and official website visit repeatedly is that the museum would also work to bring in real life science as well. The Hall of Real Robots, for instance, would display a rotating exhibit of robots from various organization around the world, such as Honda’s Asimo or the Mars Rover. Science fiction has always been a point of contact for young people that eventually find themselves in STEM fields (Science, Technology, Engineering, and Math) and the Hollywood Science Fiction Museum seems intent to help young people draw that connection.

As exciting as all of that is, the Hollywood Science Fiction Museum is a huge, expensive undertaking put together by a group of enthusiasts and fans. Hopefully, they will gain the interest they need to make this a reality. The initial Kickstarter was fully funded yesterday and even managed to surpass the goal by ten thousand dollars. We’ll see if that momentum can be maintained in future campaigns.