Zach Snyder teases the new Batmobile on Twitter. WARNING: This is almost content-free.

If you can muster up the emotional fortitude necessary to care about Man of Steel 2: Batman and Superman In The Battle For Who Is The Mopiest (or whatever it’s going to be called), then you might want to know what a tiny portion of the new version of the Batmobile will look like in said film. Well people, today is your lucky day! Zach Snyder has posted a pic to twitter that reveals – wait for it – a tiny portion of the Batmobile as it will appear in said film. And here it is! 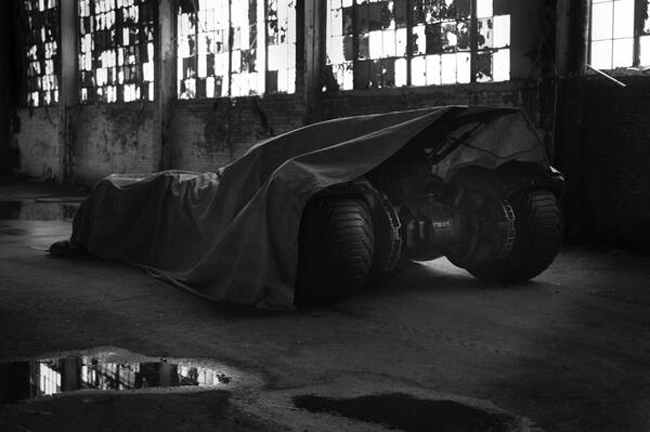 Snyder’s tweet added “Could be time to pull the tarp…Tomorrow?” Since he isn’t JJ Abrams, I think we can safely assume he will actually pull the tarp and let us see the whole thing tomorrow. Which… yay?

Obviously, it’s difficult to tell from a coy photo that only reveals the back wheels and general outline, but I think it’s safe to say this might just be the greatest Batmobile of all time. I mean, look at it! It’s definitely a car, and it definitely looks like it might be Bat-related. Maybe even Bat-adjascent. Also, it kind of looks like the Motor Trends version of pornography from like 1910, so that’s a win.

More seriously, I’m somewhat interested in knowing what the whole thing looks like. Big wheels aside, it’s definitely a departure from the Dark Knight Trilogy’s Tumbler. Could this mean the Batman we’re getting in Man of Steel: 2Bat 2Furious will be entirely distinct from Christian Bale’s raspy, bad-knees Dark Knight? I think we all know the answer: MAYBE.

Serious question: If this new Batman ends up being a wholly new take on the character, is WB making a mistake by introducing him in the Man of Steel sequel instead of a separate film somewhere down the line? Sound off in comments, and stay tuned tomorrow, assuming we get to see the full Batmobile.

Insomniac Explains Why Sunset Overdrive is Exclusive to Xbox One – Update

Diablo III: Reaper of Souls Coming to Xbox One, PS4 on August 19