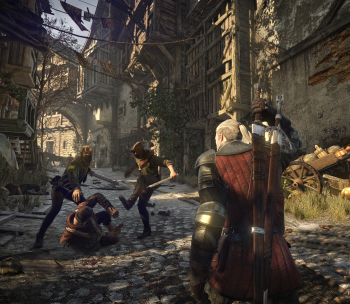 The Witcher 3 may have been delayed to 2015, but at least when it comes out players will have a variety of platforms to choose from. Some may buy it for next-gen consoles while others will snatch up the SteamOS edition, but CD Projekt is really hoping fans will pick up a GOG.com copy. Outside of the DRM-free copy you’d get with a pre-order, CD Projekt is sweetening the deal with extras, additional games, and up to 20% off the regular price tag.

If this is your first time buying a Witcher game from GOG, CD Projekt starts you off with a modest 10% discount ($53.99). If one of the previous games are in your GOG library, that discount increases to 15% ($50.99), while owning both games reduces the price to 20% ($47.99). If you purchased a retail copy of the previous games, and it came with a GOG redemption code, you can still unlock it to receive the full bonus.

Witcher 3 already has several bonuses from digital storefronts, including a high-quality digital artbook, bonus videos, and a Witcher 3 world map. On top of that, GOG is offering a staggering number of exclusives. A GOG purchase adds wallpapers, avatars, The Witcher: House of Glass digital comic, a soundtrack with 4 exclusive tracks to your digital haul. Meanwhile, the pre-order bonuses include two closed beta keys for The Witcher Adventure Game (launching this summer on GOG’s Galaxy client) and a copy of the RPG classic Neverwinter Nights.

As disappointing as it is that fans need to wait a year before concluding Geralt’s adventure, this pre-order bonus certainly helps soften the blow. Bonuses like Neverwinter Nights will be available once the pre-order is completed, while others will be released prior to The Witcher 3‘s launch. And there’s still more on the way; CD Projekt has announced that additional extras will be revealed in the near future.

Disney’s Fantasia: Music Evolved Gets Weird in the Neighborhood

The Gravewalker Terrifies in Middle-earth: Shadow of Mordor Trailer