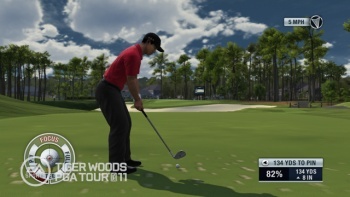 Tiger Woods’ chronic inability to keep it in his pants may be a bigger problem than EA expected as the new PGA Tour 11 has suffered a “particularly catastrophic” drop-off in sales.

A lot of high-profile (and high-paying) sponsors abandoned golfer Tiger Woods in the wake of his infamous sex scandal, but not EA Sports. Peter Moore stood by his man, saying in early January, “Regardless of what’s happening in his personal life… Tiger Woods is still one of the greatest athletes in history.” 2009 sales figures appeared to make that decision look smart; Moore said later that same month that the PGA Tour franchise suffered “no degradation of sales” and that “overall franchise sales for calendar year ’09 were better than ’08.”

Calendar year ’10, however, isn’t looking nearly as rosy. The newest iteration of the game, Tiger Woods PGA Tour 11, has suffered a precipitous 68 percent decline in year-over-year sales since being released in June, with the Wii version down a “particularly catastrophic” 86 percent, according to Cowen & Co. analyst Doug Creutz.

Much of the loss is attributable to the fact that the 2010 edition of the game shipped with the Wii MotionPlus, but Creutz also pointed to Woods himself as a big part of the problem and, even worse, suggested that the damage may be beyond repair. “We are concerned that Woods’ scandal woes may have permanently damaged the sales potential of what we believe to be EA’s third most important sports franchise, behind Madden and FIFA,” he wrote in an investors note.

Could this be the beginning of the end for Tiger Woods and EA Sports? Things are tough all over, as Creutz noted; Skate 3 is down 40 percent compared to its predecessor and Green Day: Rock Band doesn’t seem to be living up to its hype either. But Tiger Woods is a known quantity, a “go-to guy” that EA Sports should be able to rely on to help keep the ship afloat. Sales will go up and sales will go down, but an 86 percent drop on a motion-controlled platform that’s basically tailor-made for golfing games? There’s just no way to put a good spin on that.

OnLive CEO Says Service Is Not For Hardcore Gamers