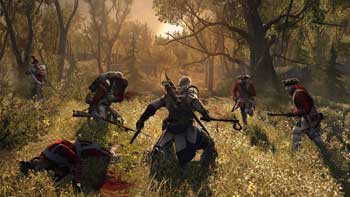 The murderous anthology includes five games and more DLC than you can shake a hidden blade at.

You may have lost track of the Assassin’s Creed series at some point over the past five years. I don’t blame you; Between ACII’s annualized installments and the series’ numerous mobile releases there’s a lot of murder to get through. If you’ve fallen behind on the series, Ubisoft has just the thing.

The pack comes in a fancy steel tin, and each game comes with an “exclusive lithograph.” No news on availability or pricing yet – Ubisoft only just confirmed the anthology after it was accidentally outed by Amazon France – but considering at least 75 percent of the included games are bargain bin regulars, it remains to be seen how good a deal the package actually is.