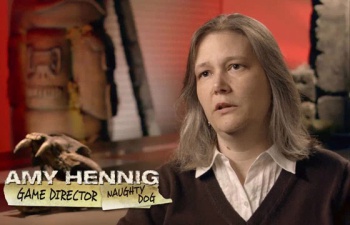 Sources claim Hennig was “forced out” by The Last of Us leads, Neil Druckmann and Bruce Straley, with the duo allegedly now taking control of the PS4’s first Uncharted game.

Update: Naughty Dog co-presidents Evan Wells and Christophe Balestra has posted an official statement on the studio’s site regarding Hennig’s exit, and claim that Druckmann and Straley were “not involved in what transpired”. The entire message can be read below.

Earlier this week we had to confirm the regrettable news that Amy Hennig has left Naughty Dog. She will be missed and, as we stated before, we appreciate the significant contributions that she has made to Naughty Dog and the industry in general. We wish her the best.

However, we feel it necessary to clear up a very important point that was unprofessionally misreported when the story broke. Bruce Straley and Neil Druckmann were NOT involved in what transpired. It was very upsetting to us that dozens of stories were run, linking back to the same hurtful accusations in the original report. As co-presidents of Naughty Dog, we are responsible for all studio affairs.

Normally, we wouldn’t respond to rumors and speculation on matters that are internal to Naughty Dog, but because the personal reputation of two of our employees is being damaged we needed to set the record straight. There is nothing left to be said on this subject. Now we’re going back to what we should be focused on – making games.

While the statement mentions Druckmann and Straley weren’t involved in Hennig’s departure, it doesn’t really address what happened completely. Hopefully, we’ll hear Hennig’s side at some point down the line and whether there’s any truth to her forced resignation.

In a report by IGN, it has been revealed that Amy Hennig, creative director and writer on Naughty Dog’s Uncharted series, has left the award-winning studio. This exit has been confirmed by Sony who issued the following statement:

We can confirm that Amy Hennig has left Naughty Dog. Amy has made significant contributions to the game industry and we appreciate all she has done for Naughty Dog. The development timeline of Uncharted will not be impacted.

What’s interesting here is that sources claim that Hennig was “forced out” by The Last of Us’ creative director Neil Druckmann, and game director Bruce Straley, and that the Uncharted game set for release on the PlayStation 4 is now under the duo’s control. While Sony has issued a statement confirming Hennig’s exit, the publisher has not acknowledged this alleged elbowing out, nor in what capacity Druckmann and Straley’s involvement in the PS4’s debut Uncharted game will be.

Amy Hennig who recently celebrated her 10th anniversary with Naughty Dog, acted as director and writer on the Jak and Daxter series, Uncharted: Drake’s Fortune, Uncharted 2: Among Thieves, and Uncharted 3: Drake’s Deception. As for Druckmann and Straley, the pair recently said there’s a 50/50 chance of a The Last of Us 2 happening, and that Sony has given them complete freedom if they want to create a sequel or not.

We’ll update the story if and when more developments unfold.