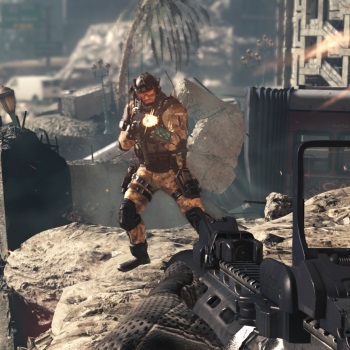 If you were putting off installing your new hard drive, now might be the time. The minimum specifications for the PC version of Call of Duty: Ghosts, posted by Nvidia, reveal a requirement for a staggering 50 GB of hard drive space. For reference, Borderlands 2 requires 13 GB, Far Cry 3 needs 15 GB, and the upcoming Assassin’s Creed IV: Black Flag will eat 30 GB of your precious storage. If you are a typical Steam user, according to the monthly voluntary survey, installing Call of Duty: Ghosts could require more than 10% of your total hard drive space, not to mention the time required to download it. The download requirements for console versions are yet to be revealed, but a similarly large investment of space is likely.

Here’s the full list of specifications provided by Nvidia:

Call of Duty: Ghosts arrives for Xbox 360, PlayStation 3, Wii U and PC on November 5. Xbox One and PlayStation 4 will have Call of Duty: Ghosts as a launch title. Activision has announced that early adopters will be able to upgrade their games to the next generation systems for as little as $10. As long as they have space to install it, of course.

Update: Activision has stated in a tweet that the specifications reported by Nvidia are not official. The official requirements are coming soon according to Activision.

Breaking Bad Could Get the Stage Opera Treatment