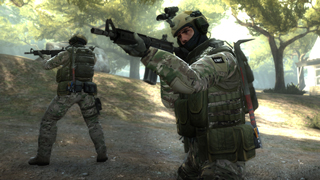 There’s been plenty of controversy lately centered around gambling site for Steam games, especially Counter-Strike: Global Offensive. After it came to light that some of the personalities promoting these sites also owned them, Valve spoke out, officially condemning item gambling. Now they’ve taken the next step, issuing cease and desist letters to 23 gambling sites.

The letter itself was posted to Twitter by the official account of one of the affected sites, CSGOBig.com. The post also indicated that the site would be closing “temporarily.” Also named in the letter sent by Valve were 22 other sites, including CSGOLotto.com and CSGOLounge.com. There’s even one DOTA 2 site on the list.

The letter directs the sites to “immediately cease and desist further use of your Steam accounts for any commercial purpose.” There is also a strict deadline imposed. “If you fail to do this within ten (10) days Valve will pursue all available remedies including without limitation terminating your accounts.”

As of now, some of the sites have already closed down. CSGOLOtto.com shut down on July 8 after being named in a lawsuit filed by a user. CSGODouble.com and CSDices.com both said last week that they would no longer be accepting deposits. CSGOWealth, which is not named in the letter, has gone with something less subtle, changing their site to a white page that simply reads, “Rip CSGOWealth. Blame Valve.”

The recent revelations in the CS:GO community have been like a large rock dropped into a pond, and the ripples are still spreading. Twitch recently banned streaming these sites as well.

It’s interesting to note that Valve isn’t calling any of those sites “gambling sites.” Instead they’re focusing on the violation of the Steam Subscriber Agreement, which is well within their purview. Only time will tell how this one will end, but it’s not looking good for the folks who run the sites in question.