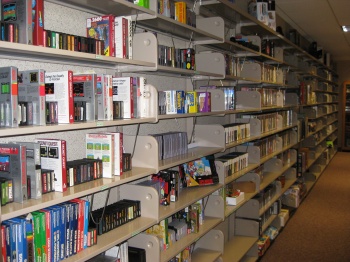 A recent essay by an Italian film scholar suggests that the quality and methods of preserving videogame history have a long way to go.

The article, written by Federico Giordano, sheds some light on the problems videogame archivists face and offers some tangible solutions. The essay is a heady read but Wired.com’s recent translation from the original Italian should make it a wee bit easier to digest.

“The widespread need to store and preserve has only appeared in recent years because of the awareness of how technological media becomes obsolete,” Giordano writes.

How can one archive an MMO? How does one judge between emulation and games running on their original hardware? How do archivists credit early Japanese and American games where staff often went unlisted? Giordano doesn’t answer these questions but he does open up an interesting discussion on the topic.

“Game archives and exhibitions have to give themselves a series of priorities,” Giordano writes. “A videogame is not merely a text, a support, atom or bit but an experience. A game is a relationship between the user/ text /space and usage and social context.”

The article condenses archiving into three stages: storage, transfer and emulation. First, the original copy must be properly preserved, then transferred onto current storage (from floppy to a modern hard drive, for instance) and finally emulated on current hardware. Any gamer who keeps old games unopened in their original box, a gigabyte of ROMs in a desktop folder, and knows all about running PS2 games on PC, is an archivist in a way. “Piracy? No, I’m archiving these games,” some might say.

Zach Vowell, an archivist for the UT Video Game Archive in Austin, Texas, spoke to me last year about the troubles of preserving games. He cited physical storage space and developer availability being the main hurdles of his job. Veteran game designers, such as Warren Spector (Deus Ex) and Richard Garriott (Ultima series), came to him with contributions, but most contemporary studios aren’t as willing to give source code, internal documents and alpha builds.

“One of the reasons that Warren Spector was passionate about creating the archive is that when he was a graduate film student [at UT] in the early 1980s – at the same time that he worked at Steve Jackson Games – he was confronted with the extreme lack of documentation regarding early film history,” Vowell said. “He didn’t want the same thing to happen to the game industry.”

The success of Vowell’s archive (and similar ones) will continue to thrive on contributions and support from gamers and game developers.

How much value do you place on preserving your favorite past time’s history?

GameStop Turns Off the Light on the DS Lite