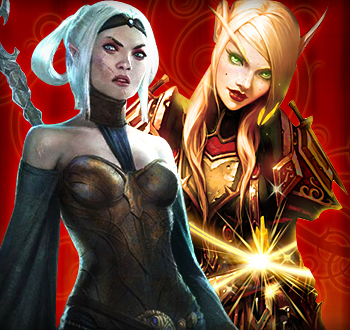 A lot of so-called fantasy is surprisingly generic, but videogames may hold the key to revitalizing our tales of wonder.

Considering they’re supposed to be fantastical creatures of fae delights and capricious whimsy, elves have somehow become commonplace and humdrum. A regular fixture in pretty much every fantasy story going, elves have lost of lot of their majesty and mystery, and instead just become part of the furniture. It might seem that elves – not to mention dwarves, barbarians and countless other overused fantasy elements – are irreparably ruined, but in Issue 287 of The Escapist, Jonas Kyratzes says that videogames can go a long way to putting the actual fantasy back into the fantasy genre.

[T]here is hope for us yet, even in the realm of digital storytelling – perhaps especially so. Have you ever wandered from Caldera to Gnisis and seen a Netch float overhead? Have you seen Ald’ruhn? Have you travelled from city to city by silt strider? When the Elder Scrolls series began, the Dunmer were just Dark Elves, slaves to cliché as so many of their kind. But someone made the decision to change that, to give us a world that functioned on its own terms, to give the Dunmer the dignity that will make them a real people. The result is flawed in many ways, perhaps too many to be considered truly great, but there must be some reason that so many years after its release, I still gaze longingly at the map of Vvardenfell and remember my journeys through that land.

In another world, there is a mining colony in a valley near the city of Khorinis. I remember walking down into that valley, seeing the castle that stood by a river. I remember fighting strange bird-like creatures called Scavengers, and their distinctive call. I remember the miners and working people, their dry humor, their gruff friendship, their triumphs and tragedies. And I remember the streets of Khorinis itself, from the houses of the nobles to the gutters of the poor. I’ve been there.

Videogames gives us the ability to explore fantasy worlds in greater detail than we ever have before, and Kyratzes thinks it’s about time we set Tolkien aside and starting letting our imaginations run wild. You can read more in his article, “Second Hand Elf.”