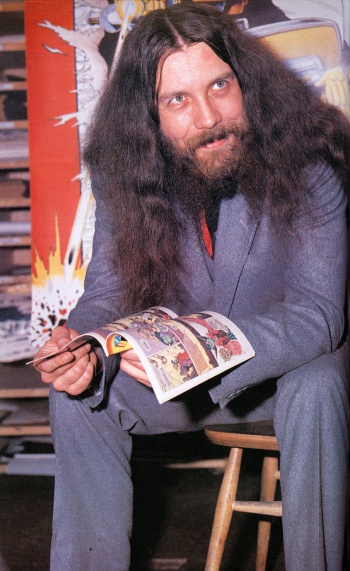 Alan Moore’s handwritten interview pages are being offered to collectors, detailing his early thoughts on a Watchmen film and which comic book artist would win in a fight.

Alan Moore recently decided that he’s had quite enough of critics, comic book fans, and public speaking engagements, prompting him to give one final interview before making a grand exit. Of course, Moore’s “final” interview in no way stops people from wanting to read his opinions; if anything, it’s set a price on them. For example, a handwritten 1980s-era Alan Moore interview has appeared in an online auction with a $300 starting bid. That’s practically a steal, by the way, considering the pages are valued at $900 – $1300 and were written at the height of Moore’s DC Comics popularity, before everything went terribly awry.

If you’re expecting to see a younger, optimistic Moore willing to give the Watchmen movie a chance, you won’t find him in this interview. The interview makes it clear that Moore already had a pretty fixed opinion on Hollywood and Watchmen adaptations, although it’s not nearly as caustic as later interviews on the topic would become. It’s almost as if Moore got sick of the subject for some reason…

“They asked me to write it,” Moore wrote, “but I was too busy with comic work and had to say no. Also, since in my limited experience it’s practically impossible to ensure creative control over the work unless you have the energy and inclination to direct the thing yourself, which I don’t, then I wasn’t very keen to work in the film industry anyway… Watchmen, if it gets made, may be a wonderful film or a complete fuck-up. The outcome seems fairly random to me, and if it’s the latter result, I’d rather it was somebody else who fucked it up, and not me.”

While Watchmen is certainly the focus of these pages, Moore also discusses the effect of mass media on society, movies that he recently enjoyed, and who would win if Jim Shooter and Dick Giordano wrestled in the mud. (In Moore’s opinion, “The mud”.) While some of these comments were echoed in later interviews, it’s fascinating to look at as a historical document, especially considering we may not have any new commentary from Moore for the immediate future.

Settlers of Catan Has Sold Over 18 Million Copies Worldwide