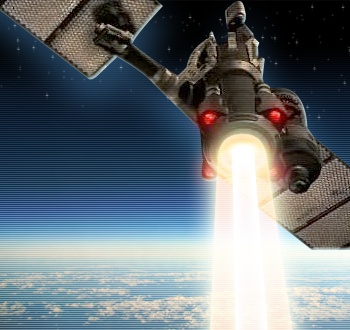 The games of today are inspiring the real life weapons of the future, and maybe even of today.

We’ve all played games, especially shooters, in which the the weaponry and technology is firmly set in the world of science fiction. Halo‘s shields, the sentry guns of Portal and Half-Life 2, and the plasmids of BioShock 2 are fun game mechanics and adversaries, but we’ll never see them in being deployed on CNN. Or will we? Just as Star Trek inspired innovation and inventions, or how authors like Jules Verne and William Gibson predicted such things as television and the Internet, videogames may be the genesis of today’s more modern weapons. In issue 242 of The Escapist, C J Davies investigates some far-fetched military advances and relates just how similar they are to what we play on our Xbox every night:

What about the big boys? The ultra-weapons that get called in when your hands get too quivery or fingerless to operate a handheld device? Gears Of War officially swooped up the Coolest Weapon Name Award with the Hammer Of Dawn – an absolute bastard of a weapon that rains down Imulsion-powered satellite beams onto helpless troops. There’s no way a weapon like this could be remotely feasible on this plane of existence, right? Wrong. While lacking the red-hot power-beam, the US Military has been beavering away on a similarly hefty satellite-controlled weapon called ‘Rods From God.’ It essentially hits targets and bases that are deep underground by firing a whole bunch of large metal poles to Earth at 7000mph. From space. Those protective bunkers aren’t safe anymore, kids.

How many times have you wondered why our troops don’t have Master Chief’s shield or maybe just some damn lasers? What’s taking so long? Read the rest of Arsenal Freedom to find out that we might not have very long to wait.

EA: This Console Generation Will Last Longer Than Usual

Study Finds Too Much Gaming Is, and Is Not, Bad For Kids