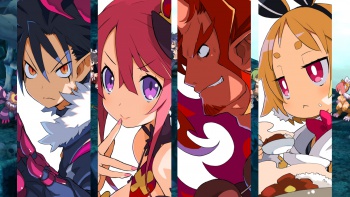 Hey, doods! Disgaea 5 will be coming to North America and Europe next fall.

NIS America announced on the PlayStation blog Disgaea 5: Alliance of Vengeance will arrive in North America and Europe on PS4. The cartoony strategy RPG will be available next fall.

This Disgaea game is “a tale of rebellion and revenge” – something that isn’t unfamiliar to the previous games in the series. A completely new cast of characters stars Killia and his rebel army against Dark Void, an Overlord who wants to enslave the Netherworlds. Unlike other Disgaea games, Disgaea 5 has greater exploration in the Netherworlds instead of only getting a glimpse.

Going along with Killia’s army, Disgaea 5 can have 100 characters on the grid-based battleground at the same time (compared to 10 on PS3 in earlier games in the series). There are even more character races and jobs than before. Revenge Mode empowers characters to get stat boosts when allies have taken enough damage.

New to Disgaea 5 is the Alliance Attack system where only main characters can use special moves when they have an appropriately aligned relationship.

NIS America recently addressed speculation that the company was in financial trouble. NIS America stated reports that Disgaea 5 will need to sell 150,000 copies was “self-deprecating humor.”

Games, Movies and More – See the Nominees for The Escapist Awards 2014