Critics of Dragon Age II who are bullish on the game tend to extol the virtues of its narrative. I enjoy narrative in my videogames. I do not, however, place value on narrative over mechanics. A good videogame needs to have both. They usually don’t. It’s therefore natural when games like Dragon Age II, whose characters and story are arguably stronger than their mechanics, roll around, those narrative-loving critics are so pleased.

The challenge with assessing value to videogames on behalf of their narratives is that we cannot read them like ordinary texts, a la books and movies. The story of a videogame that allows players to make moral choices has to provide narrative quality along all the paths its players may take in order to deserve our critical praise. Dragon Age II’s story fell apart for me in spectacular fashion on account of the choices I made, which were summarily ignored.

One of the most interesting aspects of the land of Thedas in the Dragon Age universe is the way BioWare has subverted traditional fantasy lore. Elves are current or former slaves, having been at war with humanity in the distant past, whereas in most fantasy traditions Elves are an enlightened race in their declining years. The other chief subversion is the nature of magic, which in Dragon Age is born from interaction with a spiritual realm called The Fade, where spirits of good and evil dwell. Mages are susceptible to possession from evil spirits, which turns the Mages into Abominations.

The Knights Templar, a subversion of the Paladin archetype in fantasy, are charged with organizing Mages into Circles, which not only keeps the Mages in one place to be watched but also allows the Mages to police their own ranks by educating apprentices about how use of blood magic could lead to possession. This mythology of the Templars and the Mages is at the heart of the story in Dragon Age II. The game takes place in the city-state of Kirkwall, which has a large Mage Circle and an equally-large contingent of Templars. The latter are led by Knight-Commander Meredith, who is a zealot at best when the character is first introduced. She is brutal in her treatment of the Mages in Kirkwall, and this tension eventually threatens the peace of the city-state in the game’s third act.

BioWare’s narrative specialty is giving players the ability to shape worlds through moral choices. In Dragon Age II, the player is constantly given opportunities to side physically in action or ideologically in word with either the Mages or the Templars. My character, a female Warrior version of the main character Hawke, tried to walk a middle line between the Mages and the Templars.

Hawke’s sister Bethany was a Mage, and so clearly Hawke would never support the Templar propaganda that all Mages were potential Abominations just waiting to be born. Hawke also understood that the system of Mages and Templars went back much, much further in the history of Thedas than she could remember, and maybe it was there for a reason. That was the choice I made. That was how I chose to portray Hawke.

The quest called “Best Served Cold” in the third act of the game features First Enchanter Orsino, the head of the Kirkwall Mage’s Circle. Some of his Mages have been sneaking out of the Circle at night. He suspects they may be using blood magic in an attempt to oppose the Templars. The tension between the two groups is rising to a head such that Orsino is afraid to seek the Templars’ help in tracking these errant Mages, so he enlists the assistance of Hawke.

Orsino directs Hawke to a meeting taking place in the upscale Hightown district of Kirkwall. Hawke and party find a group of Mages and Templars standing together in a courtyard, who accuse Hawke of working for Knight-Commander Meredith and immediately attack. One of the pieces of loot recovered from the battle is a note about another meeting at the Docks. 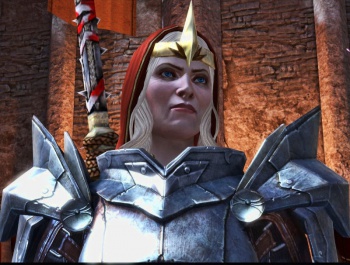 When Hawke arrives at this second meeting, she is attacked by yet another group of Mages and Templars. After this second battle, a Templar saved by Hawke in an earlier quest appears and informs her that these Mages and Templars have been working together to take down Knight-Commander Meredith. Her intolerance has become a clear danger to the entire city. And this is when the story fell apart.

It is revealed that the Mages and Templars in question have kidnapped one of Hawke’s friends, to use as leverage against Hawke should she interfere with their plot. If Hawke had chosen to befriend the cause of the Mages at this point, that makes no sense. The Mages might even have approached her for help with their plan. If Hawke had chosen to walk a middle line, incensing the Champion of Kirkwall who had saved the city from an invasion in the previous Act and proven herself a person of virtue also makes no sense.

The end of Dragon Age II was, in my eyes, an unmitigated disaster. The final choice the player is forced to make between Mages and Templars is a false one. If the player sides with the Mages, the Mages utilize blood magic to turn themselves into Abominations in order to fight the Templars, thereby justifying everything Knight-Commander Meredith had said about why the Mages were dangerous. If the player sides with the Templars, they discover that Meredith is actually insane and wind up having to kill her, which justifies everything the Mages had been saying about the Templars.

Some critics have painted this ending as a brilliant exercise in tragedy. I think it’s the result of the game having been rushed, which is not an outrageous proposition considering Dragon Age: Origins was announced at E3 2004 and released in December, 2009 suggesting a good three years’ worth of development at least, and Dragon Age II was released only 15 months later in March, 2011. The final cinematic describes a massive conflagration between Mage and Templar which has spread through the entire land of Thedas, sparked by the goings-on in Kirkwall, related in a flashback sequence in one of the worst violations of “Show, Don’t Tell” I’ve ever seen. That’s a cinematic narrative mistake that a first year film student knows not to violate, and also suggests that there was more story intended to be told, but BioWare ran out of time.

So I return to the point where Dragon Age II fell apart, the “Best Served Cold” quest. My Hawke would have been overjoyed to learn of a rebellion against Knight-Commander Meredith by Templars and Mages combined! What an opportunity to not only unseat a maniac who was threatening to destroy the city, but to also forge a new bond of cooperation between the two factions whose rivalry had been at the heart of Kirkwall’s tensions!

That would have been a choice that had reflected all the others I had made thus far. Instead, I was rushed into an ending that didn’t make any sense based on my choices, and my character. A game that presents us with those choices is obligated to account for and honor them, or it certainly doesn’t deserve our critical praise. We’re long past the point where anyone thinks it isn’t possible to tell stories in videogames, such that half-measures and incomplete narratives ought to impress no one.