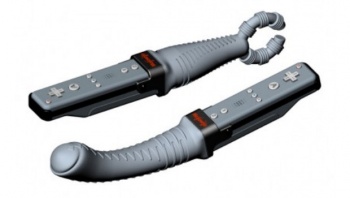 It’s been a running gag in some circles ever since the PlayStation Move was unveiled that the device bore more than a minor resemblance to a sex aid. Of course, Sony was behind the curve on that, seeing as how people had been making sex-toy jokes about Nintendo’s vibrating Wii remote controller (and its various peripherals) for years.

Well, it might have taken longer than expected, but those jokes aren’t just jokes anymore. An enterprising little group called Mojowijo has developed an extension that will turn your Wii Remote into a bona fide electric boyfriend (or girlfriend). Heck, you don’t even need an actual Wii to do it!

According to the company’s website, this is how the Mojowijo product works:

The interesting part is that the device is remotely controlled via Bluetooth – you can control your partner’s Wii parts – which could either just be used to spice up bedroom play, or could help a couple deal with a long-distance relationship.

I’m not convinced, though. Oh, it has nothing to do with the tech; I’m sure that works just fine. I just have a hard time seeing any guy (or lady) putting something that looks eerily like The Claw near their naughty bits.