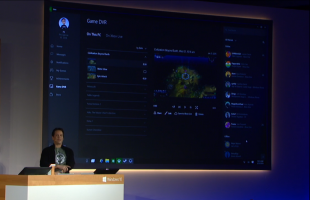 The next OS from Microsoft has a slew of new features aimed directly at gamers.

Microsoft announced today that a host of new gaming-specific features are coming to the Windows universe, starting with Windows 10.

Most of these new features live within the Xbox app we’ve talked about previously. The features we were expecting — cross-platform chat, friends lists, achievement tracking — are present within the app, meaning your entire Xbox ecosystem will be available on Windows 10 PCs, phones, and tablets.

But two key features not previously seen are coming as well. First, Microsoft confirmed that cross-platform gaming is coming to Windows 10 and the Xbox One, and the feature was demoed by Phil Spencer at today’s Windows 10 meeting. Fable Legends was demoed on both the Xbox One and an Alienware gaming PC, with both platforms playing in the same multiplayer game. It’s not yet clear how far-reaching this feature will be (like it if will be available to third-party developers).

Not only will Windows 10 users be able to play games alongside their Xbox One counterparts, but they will be able to stream Xbox games from their console, to any machine running Windows 10. That means your console will now be fully accessible on your tablet and phone (as well as your gaming PC in the next room). This could be the end result of the rumored “Arcadia,” project reportedly being worked on at Microsoft.

These features should make some sort of appearance in preview builds of Windows 10, which is due out later this year.