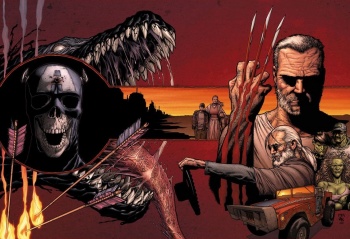 With Deadpool‘s success, it seems pretty likely that Hugh Jackman’s final Wolverine film will take an R-rated direction. Which makes sense – this is Wolverine after all – but what really matters is the story it tells. Thankfully, comic fans have reason to be excited if current sources are accurate: Jackman’s last Wolverine outing might adapt the popular, post-apocalyptic Old Man Logan storyline.

Old Man Logan started out as an eight-issue Wolverine arc written by Kingsman and Kick-Ass creator Mark Millar, with art from Steve McNiven. Set 50 years in the future, it introduces a Marvel Universe where supervillains banded together to destroy Earth’s heroes, leaving America a wasteland. Wolverine is one of the few survivors who since took an oath never to reveal his claws again. That oath is tested when fellow ex-Avenger Hawkeye shows up with a new job, taking them across the villain-ruled continent for one final adventure.

If Old Man Logan is the inspiration for Wolverine 3, it will obviously have to go undergo some changes. Fox still doesn’t have the license for Hawkeye, let alone prominent Marvel characters like the Red Skull, Hulk, or Captain America. Either way, the premise itself is a great mix of X-Men and Unforgiven that might be the perfect ending to Jackman’s run with the character.

What wouldn’t need to be changed is the graphic violence – Old Man Logan was notoriously gory, complete with horrific murders and decapitations. And that’s before Logan pops his claws late in the story. (Don’t you dare cry about spoilers. It’s a Wolverine book. You knew it was coming.) Ordinarily I’d say even an R-rated film might have to tone down the comic’s violence somewhat, but given Deadpool‘s recent success Fox might let Wolverine 3 go nuts.

What do you think? Should Old Man Logan be Hugh Jackman’s send-off to Wolverine? Or is there another story arc Fox should do instead? Share your thoughts in the comments!

Source: Den of Geek, via GamesRadar

8 of The Coolest Diablo 3 Legendaries

New NES Game Asks You to Shoot Yourself (With a Zapper)